A Quickening Inspiration:
Frank Lloyd Wright and the Japanese Print

For the Architect, particularly, [the Japanese print] is a quickening inspiration… owing to its essentially structural character and diverse materials and methods.

A pioneer collector and dealer of Japanese prints, Wright’s interest in the art and culture of Japan was sparked early in his career during his Chicago years. Wright’s first employer in the city, Joseph Lyman Silsbee, was an avid collector of Japanese art. Silsbee’s cousin, Ernest Fenollosa, was one of the first Western experts in East Asian art and literature, serving as Professor of Philosophy at Tokyo University, Curator of the Imperial Museum of Japan, and Curator of Oriental Art at the Museum of Fine Arts, Boston. In addition to Japanese art, Silsbee introduced Wright to the Japanesque Shingle style of architecture that informed Wright’s earliest residential designs, including his own home built in Oak Park in 1889. Photographs of the home, taken by Wright in the 1890s, reveal Japanese prints and objects displayed throughout the interiors. 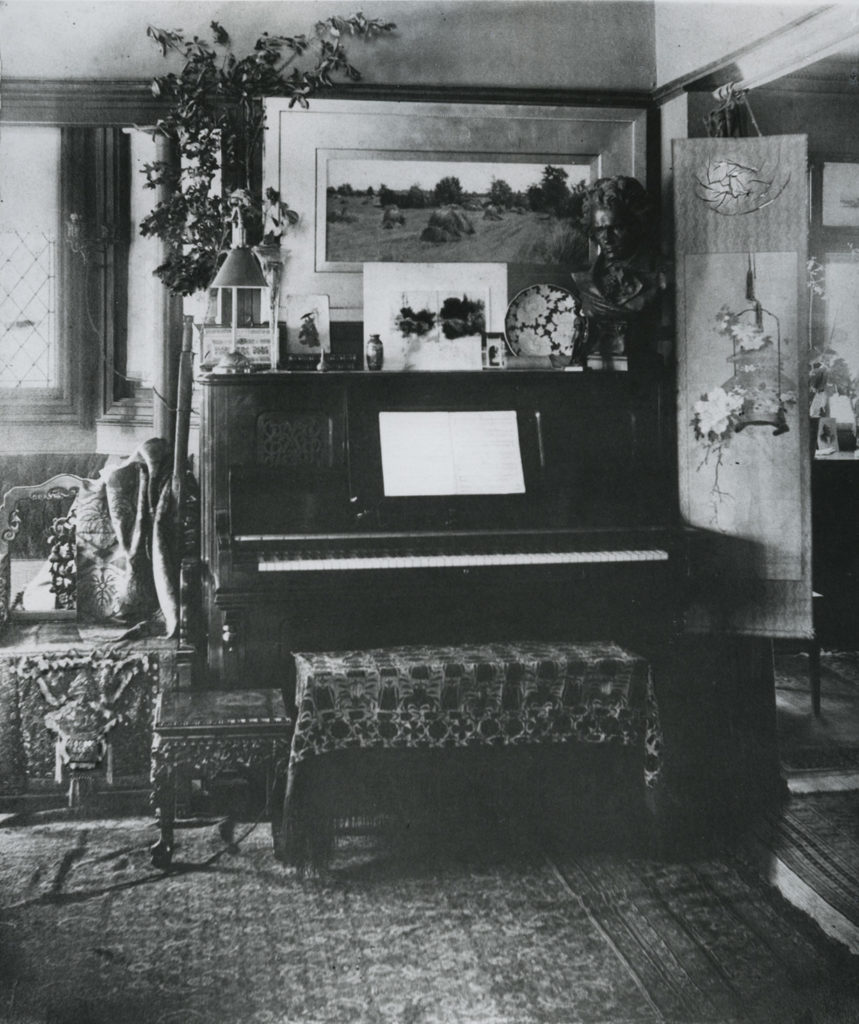 Wright acknowledged that from the time he discovered the print he considered Japan, “the most romantic, artistic, nature-inspired country on earth.” That affection is mirrored not only in his writings but also in his evocative photographs of the country taken during his 1905 trip to Japan. By this time, Wright was already an established collector of ukiyo-e prints, and according to the architect his journey was made “in pursuit of the print.”

In the spring following his travels in Japan, Wright presented an exhibition of prints by the artist Utagawa Hiroshige (1797–1858), at the Art Institute of Chicago. Hiroshige was one of the great masters of the Japanese woodblock print, and was an artist whom Wright pursued from the beginning of his print-collecting career. Titled, Hiroshige: An Exhibition of Color Prints from the Collection of Frank Lloyd Wright, the exhibition was the first ever retrospective of the artist’s work. It ran from March 29 through April 18, and featured 213 Hiroshige prints from Wright’s burgeoning collection. Wright not only curated the show, but designed the exhibit and wrote the catalogue. In his introduction to the exhibition, Wright declared that Japanese art “is no longer the sequestered art of an isolated people, but one of the most valuable contributions ever made to the art of the world.” 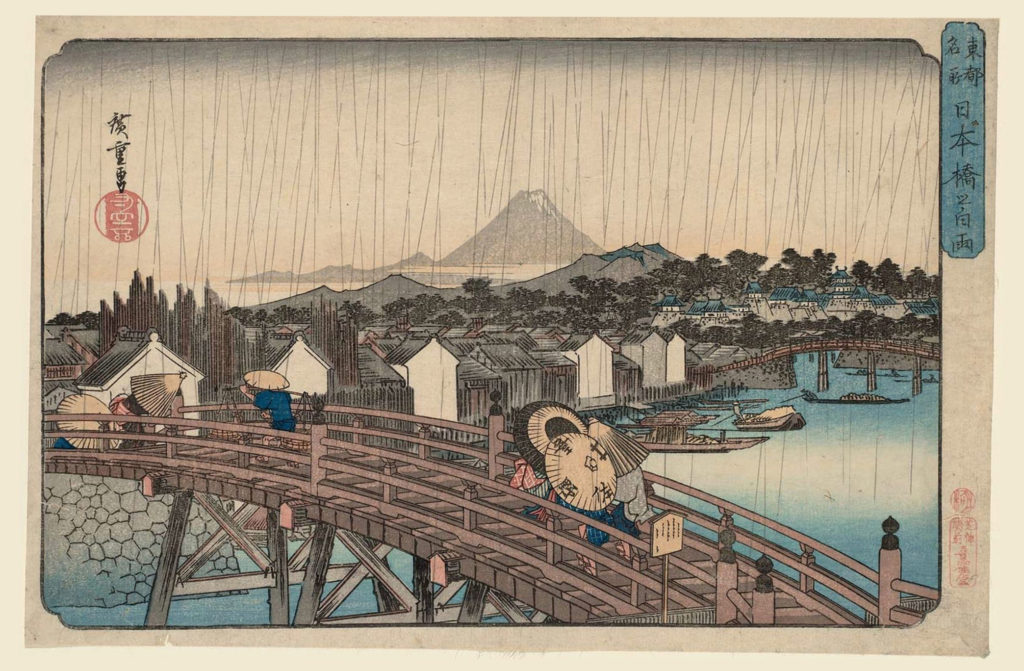 In 1908, Wright participated in a second, larger exhibition at the Art Institute, featuring prints from his own collection along with works owned by major collectors, John H. Wrenn, Clarence Buckingham, Frederick W. Gookin, and J. Clarence Webster. Wright contributed almost a quarter of the 649 works that comprised the exhibition, a significant showing for his collecting efforts to that point. Again, the architect designed the installation and layout for the exhibition. 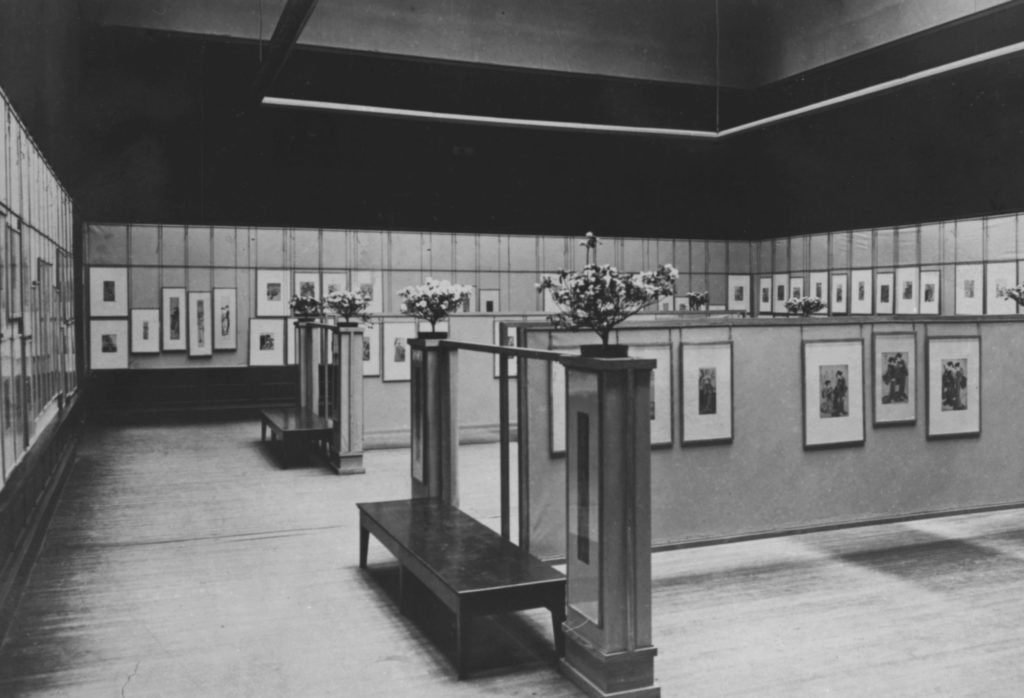 While Wright maintained that Japanese art and design only confirmed the organic principles of design that he pioneered in his Chicago Prairie buildings, he identified qualities found in ukiyo-e prints that he embraced in his architecture. Fundamental to the prints’ appeal to Wright was their creators’ consummate mastery of structure, their intuitive grasp of underlying form, which allowed them to capture the essence of their subject. According to Wright, “A Japanese artist grasps form always by reaching underneath for its geometry. No matter how informal, vague, evanescent, the subject he is treating may seem to be, he recognizes and acknowledges geometry is its aesthetic skeleton; that is to say—not its structural skeleton alone but—by virtue of what we have termed the symbolic spell-power—it is also the suggestive soul of his work.”

Published in 1912, Wright’s book, The Japanese Print: An Interpretation offers an analysis of the print in its cultural milieu. The theories set forth in the text can be read as a statement about Wright’s approach to architecture. Wright names as the supreme principle of Japanese aesthetics “stringent simplification by elimination of the insignificant and a constant emphasis of reality.” He continues, “The process of simplification is in a sense a dramatization of the subject. To dramatize is always to conventionalize; to conventionalize is, in a sense, to simplify; and so these drawings are all conventional patterns subtly geometrical, imbued at the same time with symbolic value.”

In his autobiography, Wright states that in the course of his first trip to Japan he found that “Japanese art and architecture really did have organic character. Their art was nearer to the earth and a more indigenous product of native conditions of life and work, therefore more nearly ‘modern’ than any European civilization alive or dead.” He concludes, “If Japanese prints were to be deducted from my education, I don’t know what direction the whole might have taken.”