The garden of Sanpoh-in is part of Kyoto’s vast Daigo-ji temple precinct, which encompasses Mount Daigo in its entirety. Established in the 9th century, the temple complex and its landscaped gardens were restored in the 16th century under the order of the Imperial Regent, Toyotomi Hideyoshi.

It is clear from Wright’s album of photographs that the Japanese landscape was one focus of his interest during his time in the country. Seven views of gardens appear in the album: two views of the Sanpoh-in Temple Garden, four views of the garden of Kōraku-en, Okayama, and one view of an unidentified garden location.

Created for pleasure and contemplation, the gardens Wright visited were designed with various landscape features—ponds, bridges, rocks, beautifully pruned trees, and tea houses—that were gradually revealed along winding paths. As they navigated the space a visitor would be presented with different perspectives of the same view, thus gaining a deeper appreciation for the design. Wright had achieved a similar effect of progressive discovery in his architecture, manipulating the experience through a carefully controlled sequence of spaces. 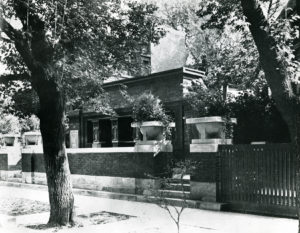 Entrance to Wright’s Oak Park Studio, ca 1906 – 1909
Wright’s Prairie buildings typically feature a complex path of entry. A series of turns in the approach to Wright’s Studio forces changing vistas as a visitor progresses from exterior to interior.